Whether you are in the military, law enforcement, or are a private citizen, we are here to assist you in the very best in quality, firearms training.

Sentri Institute is comprised of qualified instructors from a variety of backgrounds including law enforcement, military, government agencies, competition, and private training facilities. Our instructors` training and experience give them a strong understanding on how to properly educate students on fundamentals and advanced techniques alike.

Our courses are conducted in a friendly, relaxed environment that emphasizes safety and mastery of weapons systems for all experience levels. No matter what your level of expertise, we have a class that can teach you something new. We encourage all students, from beginners to the more advanced, to challenge themselves by learning and reinforcing proper techniques in order to take their skills to the next level.

We are Law-Enforcement Firearms Instructors who have taught or do teach firearms to Law Enforcement Officers (Police Officers, Sheriff’s Deputies, Federal Agents, etc.) and civilians alike. No matter what your background or experience level, we can help make you better – safer, more accurate, faster, more tactically sound, or all of the above, and make it fun for you the whole time.

We look forward to seeing you on the range!

Sentri Institute is Southern California’s most highly rated provider of firearms training classes and private firearms instruction. That’s because our NRA & California DOJ Certified Firearms Instructors are adept at teaching students of all skill levels, on all firearms platforms, including; handgun, rifle, shotgun, and even competition shooting classes.

We also can help you navigate the path to obtain your California CCW permit. At Sentri Institute we have a team California concealed carry experts offering multiple California CCW Initial Issue and CCW Renewal classes every month. Our California CCW classes are recognized by all Southern California issuing agencies, including Orange County, Los Angeles County, Riverside County, San Bernardino. We’ve been offering CCW Initial-Issue and CCW Renewal Classes since 2015. Our content-rich class curriculum, individualized range instruction, and skilled firearms instructors are the reasons why our students keep renewing their CCW with us time, and time again.

Above all, we always carefully manage our class sizes, ensuring the right instructor to student ratio. As a result, our firearms students always get one-on-one attention, so all of our students can develop their shooting skills in a safe, fun, and informative learning environment. That’s the reason our top-rated firearms training and gun safety classes, regularly earn us 5-star ratings from our students! Your small investment in your training with Sentri Institute will give you the skills and competence to use your firearm with confidence. If you have never trained with us, regardless of your skill level, take this chance to book a class with us. You will not regret choosing Sentri Institute for your training needs.

Our Most Popular Courses and Services

Venice was founded by Abbot Kinney in 1905 as a seaside resort town. It was an independent city until 1926, when it merged with Los Angeles. Venice is known for its canals, a beach, and Ocean Front Walk, a two-and-a-half-mile (4 km) pedestrian promenade that features performers, fortune-tellers, and vendors.

In 1839, a region called La Ballona that included the southern parts of Venice, was granted by the Mexican government to Ygnacio and Augustin Machado and Felipe and Tomas Talamantes, giving them title to Rancho La Ballona.[3][4][5] Later this became part of Port Ballona.

Venice, originally called “Venice of America”, was founded by wealthy developer Abbot Kinney in 1905 as a beach resort town, 14 miles (23 km) west of Los Angeles. He and his partner Francis Ryan had bought 2 miles (3 km) of ocean-front property south of Santa Monica in 1891. They built a resort town on the north end of the property, called Ocean Park, which was soon annexed to Santa Monica. After Ryan died, Kinney and his new partners continued building south of Navy Street. After the partnership dissolved in 1904, Kinney, who had won the marshy land on the south end of the property in a coin flip with his former partners, began to build a seaside resort like the namesake Italian city.[6]: 8

When Venice of America opened on July 4, 1905, Kinney had dug several miles of canals to drain the marshes for his residential area, built a 1,200-foot-long (370 m) pleasure pier with an auditorium, ship restaurant, and dance hall, constructed a hot salt-water plunge, and built a block-long arcaded business street with Venetian architecture. Kinney hired artist Felix Peano to design the columns of the buildings.[6]: 22  Included in the capitals are several faces, modeled after Kinney himself and a local girl named Nettie Bouck.[7][8]

Tourists, mostly arriving on the “Red Cars” of the Pacific Electric Railway from Los Angeles and Santa Monica, then rode the Venice Miniature Railway and gondolas to tour the town. The biggest attraction was Venice’s 1-mile-long (1.6 km) gently-sloping beach. Cottages and housekeeping tents were available for rent.[citation needed][9] 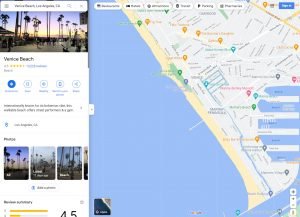 Click here for a better map of Venice Beach, CA