Welcome to Westminster firearms training at Sentri Institute. Our qualified instructors will teach you basic essentials needed. Advanced courses for our experienced students. Our Firearm course are designed for both first time shooters and experienced shooters. Any combat veteran, police officer or experienced shooter will tell you that before they go out on a mission, patrol or training scenario; the basics is what is always touched up on, trained and reviewed.

Concealed Carry (CCW) Courses
Get the training needed to get your concealed weapons permit today! In this class, you will learn some of the most advanced shooting techniques as well as a in-depth detailed understanding of every aspect of firearms law within the State from firearm penal codes to roles and responsibilities of a responsible concealed carry holder.

Prerequisites: You must have your own weapon before you register for this course
Note: Taking this course in no way guarantee’s you will receive a CCW. This only takes care of the classroom requirement of the CCW process set forth by the Sheriff’s Departments

Firearm Safety Certificate (FSC) Courses
Order your certificate right here and get an appointment scheduled to take a test. The FSC is a mandated requirement by the state of California for anyone wishing to purchase a firearm. The certificate is good for 5 years.

Westminster is a city in northern Orange County, California known for its many Vietnamese refugees who immigrated to the city during the 1980s.[9] They settled largely in Little Saigon, and the city is known as the “capital” of overseas Vietnamese with 36,058 Vietnamese Americans and at 40.2% (2010), the highest municipal prevalence of Vietnamese Americans. Westminster was founded in 1870 by Rev. Lemuel Webber as a Presbyterian temperance colony and was incorporated in 1957.

Westminster is bordered by the city of Seal Beach on the west, by Garden Grove on the north and east, and by Huntington Beach and Fountain Valley on the south. Santa Ana, the county seat of Orange County, is right next to Westminster on the east but is divided by a small part of Garden Grove. Westminster borders the unincorporated area of Midway City, except for a small portion where Midway City borders Huntington Beach on the south.

In the court case Mendez v. Westminster, a Hispanic man sued the Westminster School District for forcing his daughter, Sylvia Mendez, to attend a run-down school because of her race. They eventually won and thus began the process of desegregation. Sylvia Mendez was later awarded the Presidential Medal of Freedom from President Barack Obama on February 15, 2011. 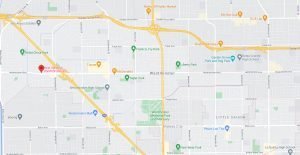